Read more
OPEN TO THE PUBLIC

Read more
INVITE ONLY, OPEN TO THE PUBLIC, SPONSORED

Read more
OPEN TO THE PUBLIC

Read more
OPEN TO THE PUBLIC, POP UP

Read more
OPEN TO THE PUBLIC, POP UP, SPONSORED

You are cordially invited to the Stahlbaum family’s holiday party! Be transported back in time and step into a room alive with music and festive cheer!
Join us at the American Irish Historical December 19th, 2019, through January 26th, 2020, for this cheeky 90-minute theatrical gathering with cocktails, costumes, and characters from The Nutcracker! Leave your shyness at the door with a drink (or three!), adorn yourself in costume pieces from the wardrobe and be ready to be completely immersed in this classic holiday tale – all with a hilarious and booze-fueled twist, provided by NYCEVENTPRO.

Don’t be surprised if you find yourself waltzing with the Sugar Plum Fairy and fencing alongside the Nutcracker – try to keep a straight face as the actors cast your friends in some of the lead roles. No acting or ballet experience required! Enjoy this Fête that’ll leave you in fits of laughter, full of holiday spirit and quite possibly … a little tipsy!

Age requirement: 21+ with valid ID
Dress code: Feel free to arrive in fancy dress! We will also provide costume pieces.
For more information and FAQ’s about the event, click here.

Mark your calendars to melt away those mid-winter blues on SoHo Broadway!

We’re starting the new year off with an opening tour of our massive indoor/outdoor venue now available for private events.

Email VENUES@NYCEVENT.PRO for more details and to schedule a time.

This Friday we are back at the Soho Grand Hotel with friends, raising money to aid the Bushfires in Australia. We will be hosting a silent art auction featuring a range of works for NYC and international artists. Soho Grand will also be donating a portion of the proceeds.

100% of your donation will be given to the organization of your choice:
Red Cross Australia (for evacuees)
Wires.ORG (for animal rescue)
NSW Government (for Firefighters)

Pregame New Years Eve with us, Treble Industries, the Jagermeister fam, and the Jump into the Light VR Virtual Reality Arcade, PlayLab and Studio.

Treble is making a playlist featuring our favorite music to come out of The Treble Community to bump all night, if you want to submit a song, include the link in the RSVP form!

It’s been another crazy year for the MARKET HOTEL / TRANS-PECOS / NYC EVENT PRO teams and we’re excited to be celebrating again at Market with the staffs all together (the one time a year this happens), as well as our extended network of friends, clients, industry, and everyone that made this amazing year possible (of course, family invited too!). We’ll be eating pizza from PIZZA LOVES EMILY, tasting HIATUS Tequila and beers from BALDOR and SIXPOINT, all the whilst cosied up with some of Matt’s favorite vinyl DJs and unique performances lead by the ringleader of our festivities, SAGE SOVEREIGN.

Oh, and there will be karaoke … (with Dan making a guest performance, but you didn’t hear it here) 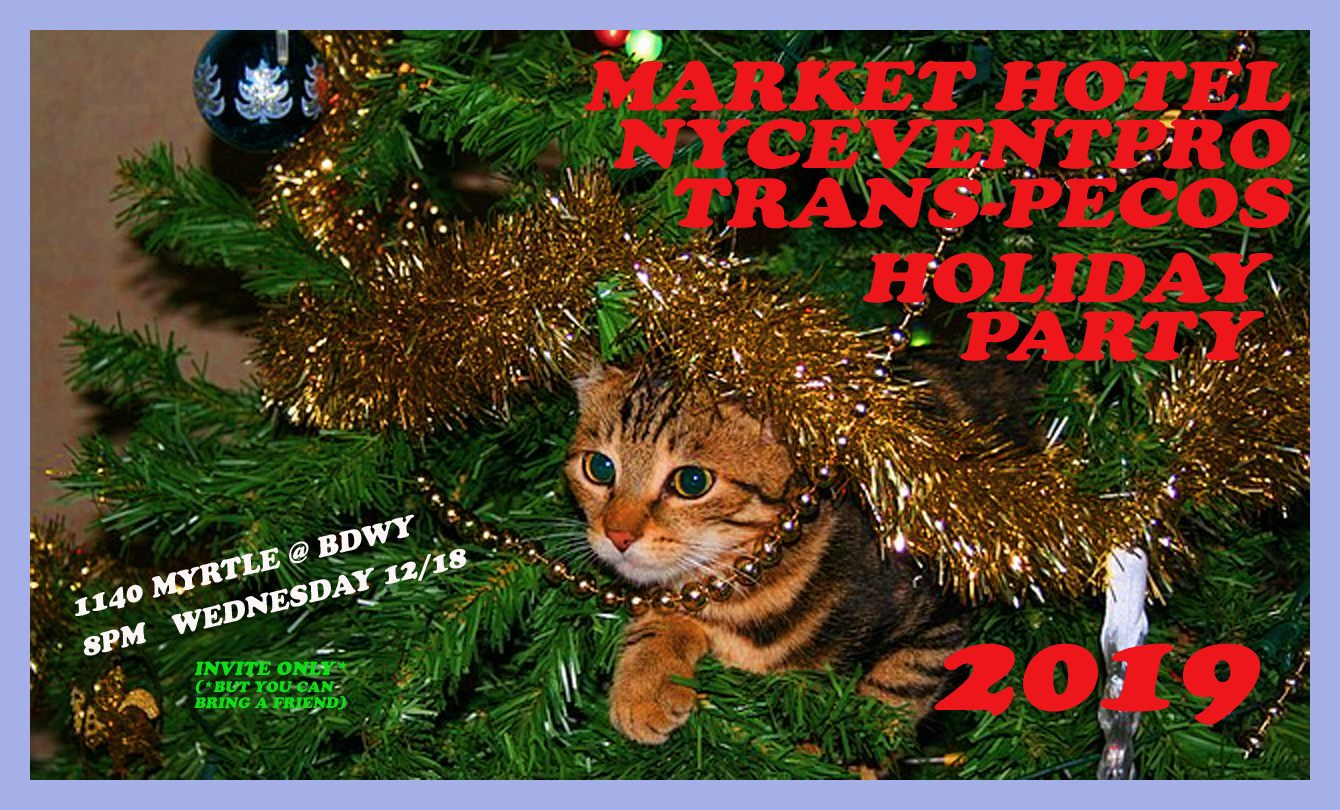 FEEL FREE TO BRING A DISH TO PASS

We are honored to be supporting, in conjunction with Artory, the Faurschou Foundation Brooklyn opening. The Foundation already includes permanent exhibition spaces in Copenhagen and Beijing, and a biannual pop-up space in Venice.

The Foundation will inaugurate Faurschou New York with The Red Bean Grows in the South, a group exhibition centered on concepts of dreams and longing, featuring major large-scale and experiential works. Many of the works are from the Foundation’s collection, and are by a diverse array of international artists, including Ai Weiwei, Georg Baselitz, Louise Bourgeois, Cecily Brown, Cai Guo-Qiang, Tracey Emin, Omer Fast, Anselm Kiefer, Edward and Nancy Reddin Kienholz, Christian Lemmerz, Paul McCarthy, Richard Mosse, Yoko Ono, Robert Rauschenberg, Alison Saar, Danh Vo, and Yu Hong. Works in the exhibition span a variety of media and explore conceptual themes such as violence, war, politics, idealism, and escapism, as well as hope, dreams, desire, lust, and longing. The idea of longing, in particular, is manifest throughout the exhibition in different ways, be it a sense of longing for someone (as in a loved one) or for something (as in a better future). The works resonate strongly as individual pieces, but also take on new meaning when placed in dialogue with one another.

The newly renovated 12,000 square-foot industrial warehouse in Greenpoint, will give the Foundation a new platform to showcase large-scale installations and experiential works from Faurschou’s collection, thematic group shows centered on the human condition and experience, and solo presentations of acclaimed artists from across the globe.

In addition to temporary exhibitions, some large-scale works from the Foundation’s collection will regularly be on view, allowing Faurschou to make more of the works in its collection publicly accessible. As with all of Faurschou Foundation’s permanent exhibition spaces, Faurschou New York will be free and open to the public.

We’re excited to be celebrating VEDA’s newest collection with our friends at Urban Outfitters at their super sweet Williamsburg, available exclusively at Urban Outfitters. Join us for drinks + tarot readings – plus, get your VEDA jacket customized by Anja Slibar!

Please join us to celebrate the launch of Patrick’s first pop up store!

We’re excited to be partnering with Paddle8, Wallplay, Offline Projects, and Tom of Finland Wines in support of the launch of Patrick Church‘s latest NYC manifestation, a storefront popup located in the heart of Soho, at 327 Canal Street. Please join us for the opening reception on Wednesday, December 4th, from 7-10pm.

Patrick started his label at the beginning of 2018, and has collaborated with the likes of Bloomingdale’s, the iconic French shoe company, Repetto, as well as Opening Ceremony. His clothes has been worn by Katy Perry, Teyana Taylor, and Christina Aguilera, to name just a few. On top of designing clothing, Patrick is a celebrated artist and just finished a successful run of his first solo exhibition in New York.